The Upcoming Rise of Grid-Scale Batteries in Japan

With an ever-increasing amount of non-dispatchable renewable power generation and targets for even more solar and wind to be added to the Japanese energy mix (the 6th basic energy plan targets 37% renewable energy), issues around grid balancing and renewable power availability are becoming ever more important. Recent curtailment of renewable power in Tohoku, Shikoku, and Chugoku are recent examples. Batteries, with decreasing production costs and a regulatory environment that evolves to facilitate their deployment, would allow the Japanese grid to accommodate more renewable power. The market seems promising, but although the current and future use cases are well defined on paper, regulations are still being discussed and could be a major hurdle – hampering the timely development of freestanding batteries.

Current and Future Use Cases Considered by METI 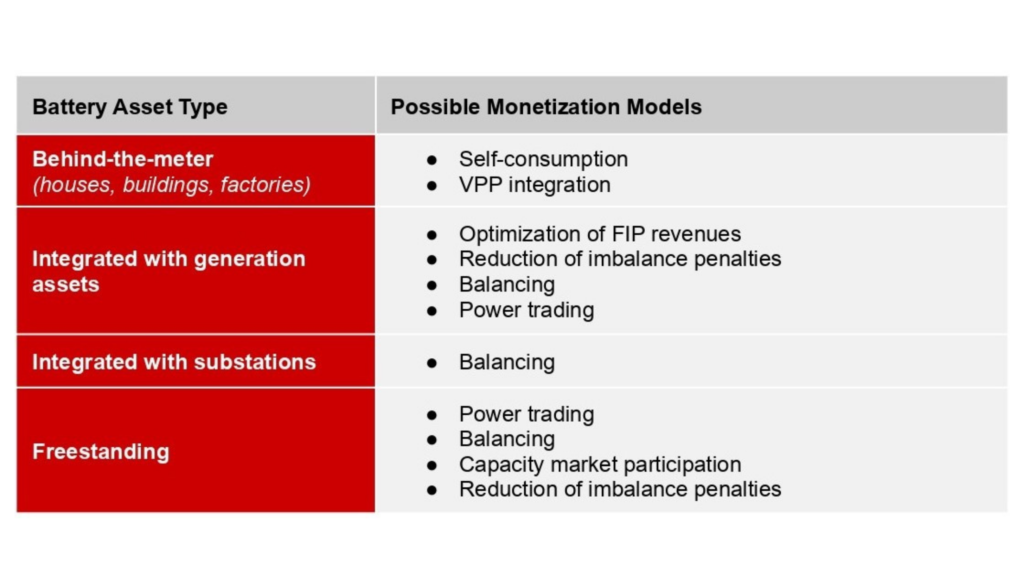 Currently, behind-the-meter batteries make up most of the installed capacity and are usually used to maximize self-consumption of locally generated renewable energy or as a back-up solution in case of emergency. The introduction of the aggregator license in April 2022 kick starts the beginning of new Virtual Power Plant businesses, in which we expect at first to see aggregators work directly under power retailers to monetize the aggregated batteries’ flexibility.

Batteries have also been integrated into generating assets, particularly in Hokkaido, which mandates storage at large PV solar plants. Batteries integrated with generation assets might become more popular soon with the recent introduction of the Feed-in-Premium system.

Generators will have the opportunity to increase revenues under the FIP system by being savvy in how they trade their power. Onsite storage equipment would allow them more flexibility in matching output with periods of high prices, making it increasingly attractive to investors. Under the FIP system, generators are also responsible for balancing their systems, and storage assets could be an option to minimize imbalance penalties. Batteries incorporated into generation assets are considered part of the generation asset from a regulatory perspective.

Freestanding batteries projects are still mainly part of pilot projects with, for example, Sumitomo installing 600kWh in Kagoshima prefecture in 2015 or NEDO subsidizing a Sumitomo 2MW installation in the US in 2021. In August 2021, Tesla announced a 6MWh battery in Hokkaido to be commissioned in the summer of 2022 – its first project in Japan. More projects are expected. Some renewable energy developers are positioning themselves in the nascent market and developing valuation models or even applying for grid connection authorization from T&Ds.

The government is keen to encourage freestanding battery development and allocated 13 billion yen in subsidies last November. These are covering to one-to-two thirds of installation costs. The subsidy applications started in February 2022. However, regulations regarding freestanding batteries have yet to be finalized by METI, which is creating uncertainty and holding back some developments.

Under the current Electricity Business Act, large-scale batteries are treated as accessories of substations or power plants. In Nov. 2020, METI launched a committee on “Spreading Stationary Power Storage Systems” to understand what policies or strategies the government further needs to develop to accelerate the development of both the Japanese battery market and industrial competitiveness. Front-of-the-meter (FOM) batteries used to balance power in the grid are one of the battery types that will be discussed in this committee.

The latest interim report states that developers will need to obtain a generation license for freestanding battery assets. This will allow the regulator to control their output capacity in times of tight supply. Licensed battery owners will have to follow supply orders in times of need. The government is also considering new regulations to promote the future use of these batteries for storing renewable power surplus and for the production of hydrogen.

Large-scale freestanding batteries do not qualify for III-2 (Replacement Reserve-for FIT, RR-FIT) and III- 1 (Replacement Reserve, RR) under the current balancing market regulation. Pumped-storage hydro does qualify, and so do aggregated demand side resources.

However, participation in the II-2 (Frequency Restoration Reserve, FRR) market will be considered on an asset-by-asset basis upon request from the generator. In its latest publications, METI uses the pumped hydro storage as a reference to decide on the regulations to be applied to freestanding batteries, so it is likely that these assets will also be allowed to participate in the same markets as pumped hydro, including the capacity market. There might, however, be restrictions based on the duration that the asset can supply power to the grid.

Given that the regulations are still being finalized, our experience has been that T&Ds are being cautious over issuing connection licenses for freestanding batteries projects, with the exception, to some extent, of Hokkaido. We expect this to change once one of the major companies involved in pilot projects or advising METI develops the first projects.

It is still challenging to create a clear quantitative business model for freestanding batteries, but more and more pieces of the puzzle are falling into place, and the first assets are already being developed. We expect an increase in project announcements and more companies to integrate these assets into their business portfolios this year.

As always, we will keep an eye on the development of the regulations and the market, and their impact on the rest of the Japanese power industry.

PrevPreviousThe Emergence of Microgrid Development in Japan
NextSmart Meters in Japan: A Cornerstone of the New Power SystemNext